How ‘bosses colluded to defraud’ SKMTH

An internal audit titled Assessment of Terminal Benefits of former Commissioning Manager (CM) carried out at the Sir Ketumile Masire Teaching Hospital (SKMTH) has revealed that former Hospital CM, Dr Thato Moumakwa benefited an amount of P129,646.45 as a direct result of an illicit salary restructuring.

Former Miss Botswana 2009 second princess and Real Housewives of Johannesburg Reality TV Star, Naledi Willers has died, Showbiz has established. Willers who had been battling breast cancer for years succumbed to the disease.

African Agriculture recently unveiled their new tractor brand that will be assembled locally at an event held in partnership with the Botswana University of Agriculture and Natural Resources (BUAN).

Former president, Ian Khama says he has been fully aware that the Directorate of Intelligence and Security (DIS) seeks to create an impression that he was a national security threat and that he has committed treason.

An Internal audit/Investigation of pharmacy operations has exposed a deep-rooted rot within procurement at the Sir Ketumile Masire Teaching Hospital (SKMTH) Pharmacy. This is alleged to be the reason behind the hospital's parting ways with acting Commissioning Manager (CM) and former pharmacy manager, Gideon Ditlhogo.

As the rows of multi-coloured letters lit up his computer screen at the Botswana-Harvard AIDS Institute Partnership, Sikhulile Moyo looked on in surprise. The letters represented the genetic codes from thousands of coronavirus samples.

MOLEPOLOLE: The Mareko family of Molepolole are struggling to come to terms with the death of their 17-year-old son who was recently killed by his feared younger brother over a P60 debt. 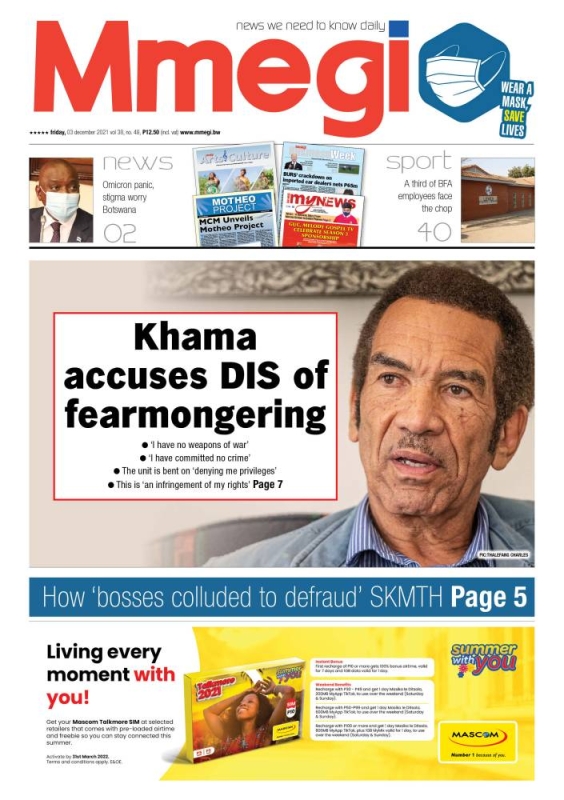 It is not a crime to have fun as long as one’s having fun does not infringe on other people’s rights to safety amongst others. Some people when consuming alcoholic beverages tend to exhibit unbecoming behaviours, for example, hosting parties and playing loud music in residential areas, while other citizens are trying to rest.The other commonality with rascals hiding behind the having fun ‘banner’ is speeding on the road, thus endangering...

Selefu
Have a Story? Send Us a tip